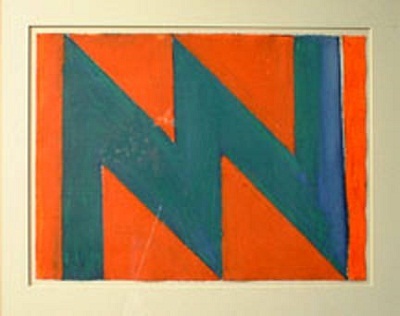 Signed, named and dated on back: Osceola Thornton Willis ’84

Dedication on back: Best wishes to my friend Harry Gaugh T W ’88.

Donated by the artist

In 1985, when Bill Baggett was Chairman of the Art Department and E. G. Licka director of the Woods Gallery (now the Southern Miss Museum of Art), at the time when the University was celebrating its 75th anniversary, Thornton Willis was invited as the artist of the celebration show. Willis was a nationally known artist and an alumnus from USM. In 1962 he had left Hattiesburg with a B.S. in his pocket. Now he came back and lent recent work to his old school for a remarkable exhibition. It was a memorable moment for the future museum. Licka had a catalogue published, in which he wrote a long and thorough article on the artist. Twelve photos make it a major document on Willis in the eighties. Osceola was part of the exhibition, as one of the Lightning of Mississippi variations, seen like one who closes his eyes in the thunderstorm and looks with his inner eye at the dark blue "M" against an orange sky.

Did Willis promise to donate the work after the show? Probably not. The work traveled back to New York and stayed in Willis‟ studio until 1988, when the artist dedicated it (and we presume offered it) to his dear friend Harry Gaugh, the eminent art critic, known for being the expert on Franz Kline, and an artist himself. Gaugh died prematurely in 1992.

How Osceola finally came to Hattiesburg is not clear. Circumstances have made what was a work of friendship between a great artist and a great art historian is now a treasure of the Southern Miss Museum of Art.