Woman sitting in an interior 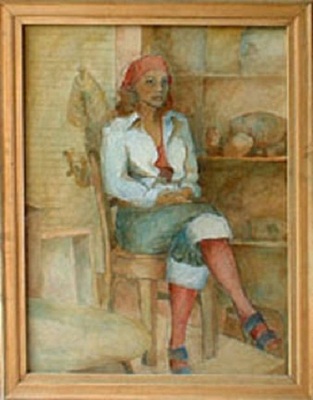 Not signed, not dated.

An artist, illustrator, designer, sculptor and photographer, this is how Ferguson presented himself at the 100 Alumni Show in 2010. Richard Ferguson earned his BFA at USM in 1983, having studied painting with Professors Harry Ward and Jim Meade. In this ambitious painting of a woman in a chair the young artist shows talent and great application. Using transparent paint, like watercolor, over a carefully prepared though sketchy drawing on the canvas, the composition is as simple as solid, and the firmly planted model on her chair gives us almost a feeling of Cézanne. The modest concentration on the face, becoming part of the general color scheme, honors the psychological aspects of the sitter, but at the same time lifts the painting above the limits of the portrait.