The Negro Looks Ahead 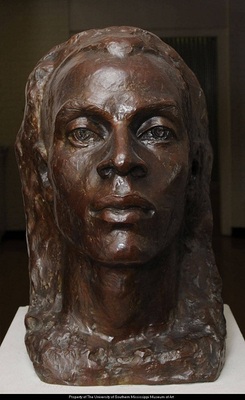 Donated to the University of Southern Mississippi

Richmond Barthé’s capacity to reinterpret ancient forms, as they have come down to us and have been integrated in the Western art tradition; to liberate them from their academic implications; and to become himself a classic artist, strikes here again the attentive student. More-than-life-size heads belong to Rome and its princes, princesses, its senators, its philosophers. In Europe we encounter them in the Italian Renaissance, in nineteenth century France; they honor the past of great nations. Barthé places his African man in this great line of civilization, turning the Negro to the future.

Candid observation of the bust denies the immediate and uniquely male gender of the persona representing here the black race. The head has qualities of both sexes. With this in mind it may bring us to another great artistic ancestor of Barthé, the Egyptian ruler portraits. We think especially of the 18th dynasty of the 14th century BC, namely Akhenaton (with his pronounced Negroid traits!), his mother, queen Tiy, his wife, queen Nefertiti, and the boy king Tutankhamen, we know so well from his tomb portrait.