The Awakening of Africa 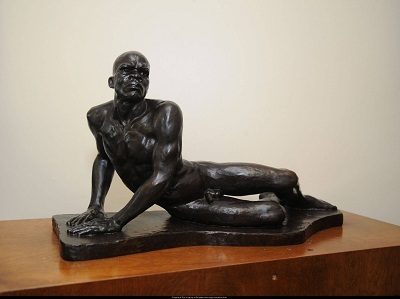 Donated to the University of Southern Mississippi

The personification of Africa is a nude black man, lying on the ground, getting up on his hands, raising his head and torso with strength, determination and even anger. The image inscribes itself in a venerable classical tradition, to which Richmond Barthé gives a personal twist. The original pose would be the Greek archetype of the fallen hero. Usually it is applied to the noble dying soldier in a battle scene, for instance the Dying Warrior from the tympanum of the temple of Aphaie, Aegina, 480 BCE, followed by many examples in Hellenistic and Roman art. Barthé inverts its iconography and shows the warrior, not as a beaten passive victim, but redressing up his heroic body, courageously defying the future. The beautifully modeled and perfectly proportioned young body can’t help but recall further the Slaves by Michelangelo, freeing their bodies from the resisting earth, as a symbol for the spirit liberating itself from matter. The torsion of Barthé’s Africa, (Africa meaning here, rather than the continent, the black race), translates perfectly the hardship as well as the determination in the process of standing up. It might well represent the difficulties of an African culture to rise in the middle of the Anglo-Saxon dominated Occident, as Barthé experienced it in his own career as an artist, with its troubling ups and downs.

The creation of the clay or plaster model in 1959, places it not only at the artist’s personal emerging from a long depression, but also exactly at the beginning of the liberation of African countries from European colonization and at the dawn of the Civil Rights movement in the USA. Borrowing the figure and its style from the classical and academic tradition, and not from African art, has symbolic value. The unique bronze (Barthé destroyed the plaster model to prevent other copies from being cast) from the collection of the University of Southern Mississippi is therefore the foremost icon of the rebirth of the black populations of America, Africa and Europe. Chosen by Harry Ward, professor of painting, approved by Aubrey Lucas, president of USM and financed by Bobby Chain, benefactor of the city of Hattiesburg, it was the first art work acquired by this university. A Black subject par excellence, by an excellent Black artist: rarely an art work has been chosen with greater clairvoyance and courage, and rarely an artwork has found a more appropriate destination to be seen. It is the crown jewel of the USM collection.