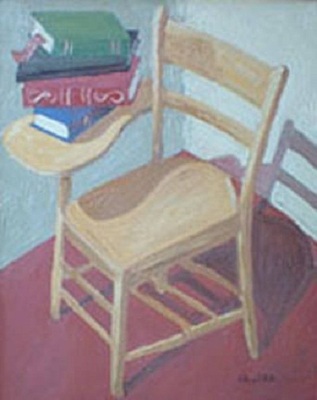 Anthony DiFatta is a native of Hattiesburg, who grew up in the swamps of Southern Louisiana. After being stationed in Southern California with the U.S. Navy and two tours at McMurdo Station, Antarctica, he returned to Southern Miss to study painting and sculpture.

In 2000 he left his job as a graphic designer at MCI WorldCom to pursue painting full-time. He is involved with charity organizations (HeArts against Aids, Habitat for Humanity…) and uses his talent to teach art to adults with mental illnesses. DiFatta’s paintings have been seen throughout Mississippi and in New York, Memphis, Santa Clara and Baton Rouge.

The Empty Chair was probably a donation of the artist to the art department when he received his BFA. It reminds us of a similar subject by Vincent van Gogh; DiFatta’s vigorous brushwork and quite thick impasto equally suggest sustained interest in the Post-Impressionist artist, so well known for his passionate and profound humanity. In his later works, DiFatta seems to have been loyal to this inspiration, both in style and iconography, not the least when he analyzes his own features chromatically and psychologically.