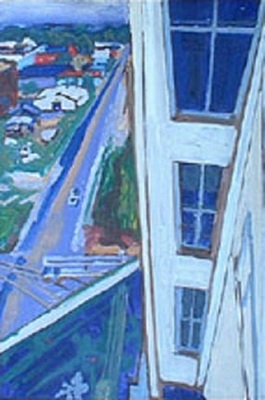 Brian Goe, who earned his BFA in the early nineties at USM, continued his studies at the University of Florida where he received his Masters in Architecture, and made his home. He participates in many shows, as an artist and designer.

His diving and daring aerial view of the street taken from the back of the America Building (or Ross Building) on Front Street, one of the highest in Hattiesburg, where art students used to have studios, announces definitely Brian‟s future interests in art and architecture. In 2010, at the occasion of the 100 Alumni Show organized by the USM Museum of Art, the artist expressed his creative engagement in this simple formula:

Through the expression of paint, the landscape serves as an inspiration that transcends the imagination.