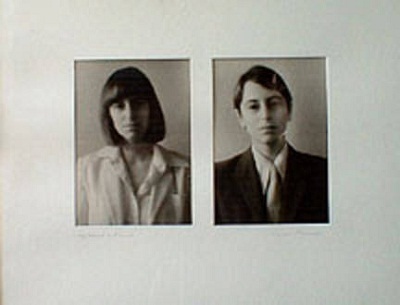 Signed and named in pencil at bottom left and right

The artist Linda Finnell has been able in her short career to express her discrete and refined personality in a number of media; she was at ease in painting and sculpting, printmaking, photography and writing. She became well-known in Dallas, TX as one of the Two Women Boxing, a company she founded with Julie Cohn after they received their MFA at the Southern Methodist University in 1983. In this studio of paper creation, the artists applied themselves to the preservation of the craft of fine bookbinding and box making.

Since her childhood and during all her life, Linda Finnell produced diaries, a choice of which was shown at the memorial exhibit in the SMU Pollock Gallery in 2000 (“Sometimes my hand has a mind of its own”). Together they form a remarkable and moving memory of a lifetime. Such a personal and subtle reflection on her epoch is beautifully expressed in her double self-portrait as two genders. The title “Self-portrait as Orlando” may well refer to Virginia Woolf’s influential novel “Orlando” (1928): the book is the classic (and humorous) study of women’s art and writing related to questions of gender in Western history.