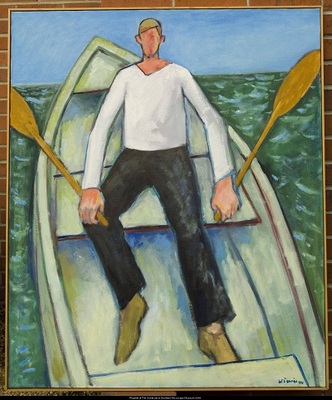 The artist, a USM student in the late forties and early fifties, is well known in all the Southern States, represented by many galleries and museums. He served on the faculty of Appalachian State University's Art Department for many years, and now lives and works in Boone (N.C.). He has shown with Bill Dunlap and Larry Edwards, to name two other major Southern artists faithful to a figurative approach in painting. In February 1996, Warren Dennis had a show in the USM Woods Gallery (now Museum of Art). The Rower illustrated the invitation card and was probably when he offered the painting to the museum’s permanent collection. Free from complexities and solidly constructed, the rower stands in the composition as simply as he sits in his boat. Sturdy in style and in subject, with its high horizon and high tonal values, the painting has the qualities of a sincere aggrandized wood cut.