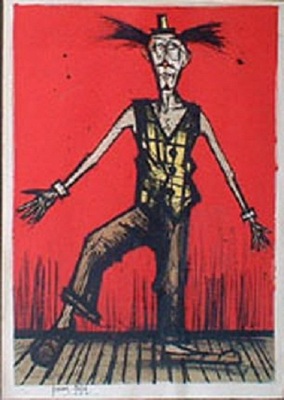 The Clown was once a most popular composition by Buffet and the 120 copies of the strong design against the simple red background were immediately sold by the Parisian Galerie Maurice Garnier. Clowns were a common subject in the twentieth century, after Seurat, Toulouse Lautrec and Picasso had introduced the circus into painting. In Buffet’s work the red nosed clumsy comedian is rarely funny, almost always sad or at least mysteriously pensive about his role in face of the public. One wonders if it is not a disguised self-portrait of the painter who comments in this way on the role of the artist in modern society. In these years the artist changes from being considered a prophet to an entertainer.