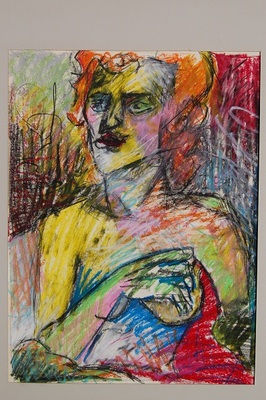 Not signed, not dated.

The little known artist, Richard Booth, is identified by a sticker on the back of the original, but worn, silver grey wooden frame. In a surprisingly able and vigorous hand, reminding us of German Expressionists and of the earlier William de Kooning, Booth sketches the bust of a fire haired woman, nude, sitting in bed, protecting her breasts with her arm in a twentieth century variation on the Venus Anadyomene. In the tradition of both Berlin before the World War I, and New York just after World War II, we recognize here the lover, prostitute and model, both venerated and feared, as a symbol of vitality and vanity, danger and emotion, in one word the pinnacle of artistic inspiration.

Richard Booth from Water Valley and an alumnus of Hinds Community College received his BFA from Southern Miss, to which he must have donated the drawing in question. Later he received a Master of Fine Arts degree from the University of Georgia; much of his prolific production stayed hidden during his lifetime until after his death in 1999.